How to make 3D glasses: Recently, films in 3D format have become more and more popular. 3D technology has been known for a long time, since the middle of the 20th century, but then it was not widely used. This technology is called stereoscopy.

When using this technology, a stereo effect is obtained for a stereo pair of images, with color coding of images for the left and right eyes of a person.

In order to get this effect, you need to use special glasses for viewing stereoscopic 3D movies.

In order to view such films, you need special glasses: shutter, polarizing or anaglyph.

Widespread distribution of this technology around the world began after the premiere of the famous film by James Cameron “Avatar”. This film made extensive use of computer technology and various visual effects. In order to fully see all the visual effects used in this film, this film is best viewed in 3D.

The 3D glasses transmit a stereoscopic image to each eye separately. Each individual eye sees the image in 2D. Such images are called stereopair.

The eyes of a person are located at some distance from each other and therefore a person sees an object from two points of view. Information from these flat images enters the human brain, and there a three-dimensional image is formed.

To watch movies in 3D, it is better to buy industrial glasses, but you can try to make 3D glasses at home. At home, you can make the simplest of these glasses – anaglyph.

Anaglyph glasses consist of two different colored lenses, usually red and blue. The image is shifted from one lens to the other lens. When watching a movie in such glasses, the viewer sees his own image for each eye and this achieves the effect of viewing the image in three-dimensional form.

To make anaglyph glasses, we need old frame sunglasses. Plain old glasses will do. If there are no such glasses, then you can make a frame from thick cardboard or some kind of plastic. Sun glasses or plain glass lenses must be pulled out of the frame.

For the manufacture of colored filters, we need transparent plastic, for example, from used plastic bottles or from other plastic products. The ideal option is when there is a transparent colored plastic of the desired colors.

Cut out future glasses from plastic according to the shape of old glasses. If you make the frame yourself, then insert two squares of plastic into the cardboard according to the size that you left for the glasses. 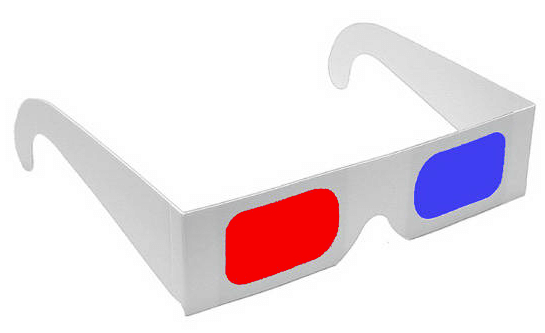 After the glasses are adjusted to size, evenly paint over one glass with a red marker, and the other glass with a blue marker. To do this, it is better to use the paint located directly in the marker itself.

The glasses are ready for further use.

I want to note that all the same, anaglyph glasses of industrial production will be of better quality than those made on their own. This applies primarily to colored lenses. Because factory tinted lenses will, of course, be better in quality than tinted ones yourself. 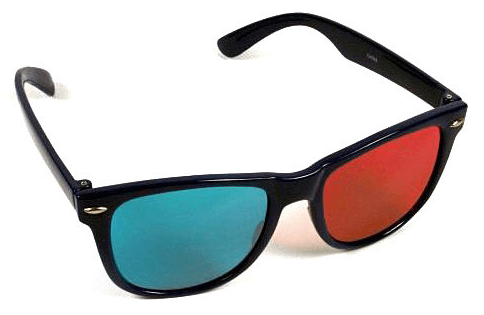 Now you can watch 3D movies at home with anaglyph glasses.

To watch movies created in 3D, special stereo glasses are required. The user can independently make himself anaglyph glasses to watch 3D movies on the computer.

How to record video with webcam