Cult Of The Lamb is an extremely unusual combination of game genres. At first glance, it may seem that this is a classic roguelike: we kill monsters, collect weapons, fight bosses and, of course, die. However, along with this, players will also have to develop their own cult to oppose the adherents of the Ancient Faith.

Despite its small size and cute cartoon graphics, Cult Of The Lamb boasts a huge variety of mechanics that can easily overwhelm the unprepared player. 10 incredibly useful tips for aspiring cult leaders – in today’s material!

After passing a short introduction (takes 5-7 minutes), a screen with a choice of difficulty will appear in front of the player. You can choose from easy, medium, hard and very hard difficulty. We strongly recommend starting with the average – the same is recommended by the developers themselves. Please do not turn the difficulty slider to the maximum, because you can ruin your overall experience of the game. 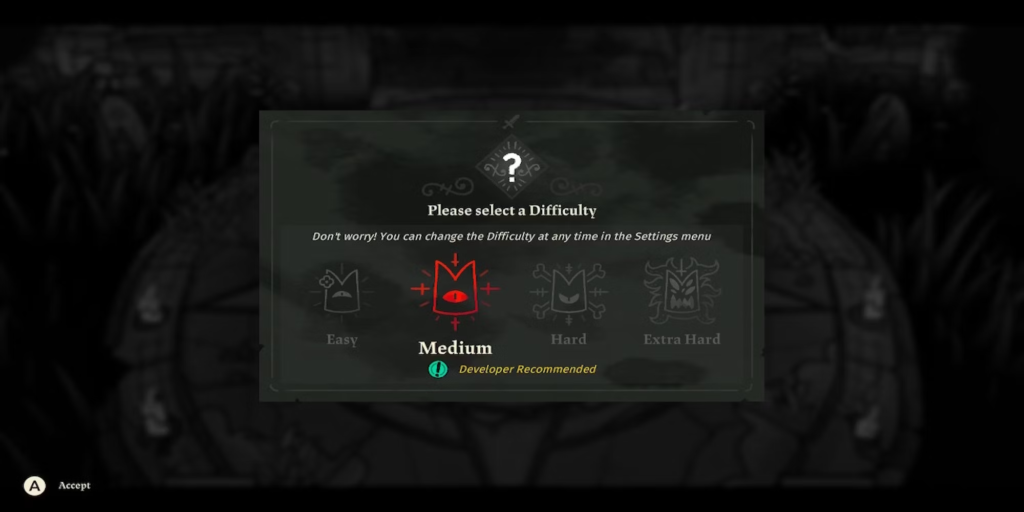 Cult Of The Lamb on high difficulties is not an easy game, especially if you play with a keyboard and mouse (more on that below). And no, the difficulty affects not only your “crusades” (battle with opponents and bosses), but the whole game in principle. Therefore, if you are not used to roguelikes, set the difficulty to medium or even low. Some players, for example, claim that Cult Of The Lamb kicks their ass even on medium difficulty.

And, of course, do not forget that the difficulty slider can be changed at any time during the game.

Don’t End Your Hike Too Early

As a rule, the average hike (run, in other words) in Cult Of The Lamb takes approximately 10 minutes. It would seem that only 10 minutes, but during this time you can find a bunch of resources, blueprints, followers, kill a sea of ​​opponents and even a boss. However, we are all human – at some point you will need to step back. If you can, please don’t end the hike prematurely! The fact is that none of your achievements will be saved: wood, stone, seeds, new Tarot cards and followers – everything will be lost. 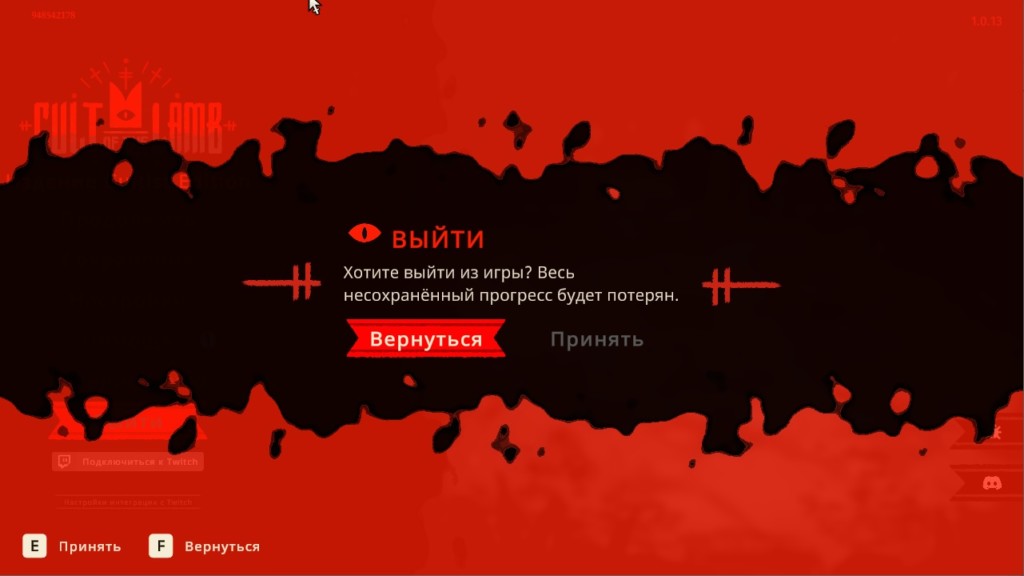 We repeat once again: during the campaigns, your process is not saved, and therefore it will be lost if you do not get to the final portal. In fact, it’s even better if you just die (for the faith!). Of course, in the event of death, a fine will be imposed on you, but this is better than losing everything at all.

Play better with a gamepad

In Cult Of The Lamb’s opening cutscenes, you can see the message “Recommended to play with a gamepad.” We advise you to listen to the words of the developers. Don’t get me wrong, the game is quite playable on keyboard and mouse. However, the management will be … inconvenient. The main problem is how the mouse works in battles. 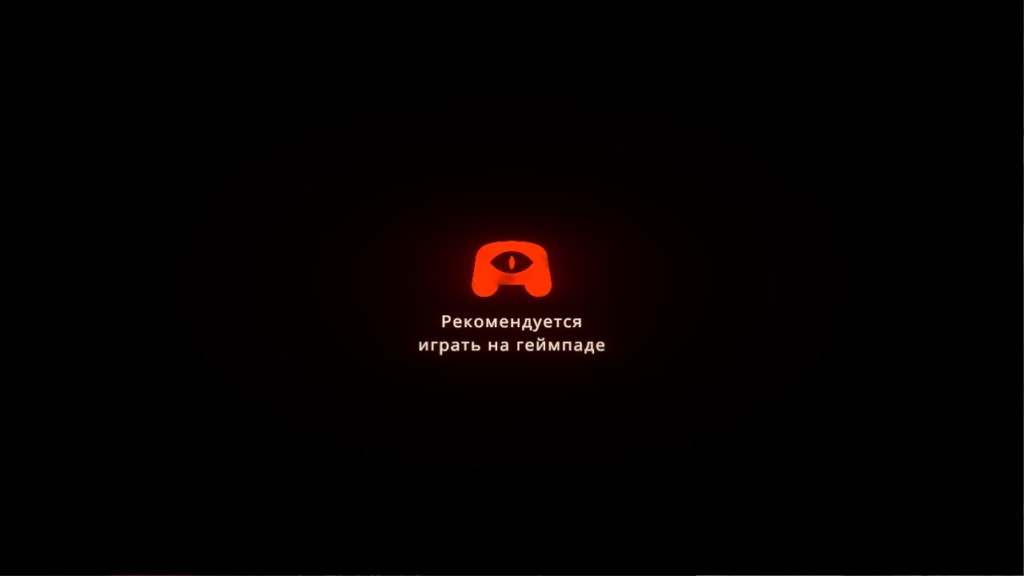 On the gamepad, you move and press the attack / magic button – and nothing else. But on a keyboard with a mouse, you need to not only move, but also direct your strokes with the cursor. In the heat of battle, you will miss, take damage and die every now and then. After all, the player needs to not only keep track of what is happening on the battlefield, but also aim with the mouse cursor.

Cult Of The Lamb has been specifically designed to be played with a gamepad.

Don’t be afraid to die

Death in Cult Of The Lamb is a completely natural process. Even if you’re playing on the easiest difficulty, you won’t be able to stay alive forever. Fortunately, in this toy, the penalties for death are relatively low: the player is deprived of 25% of the resources and coins found, as well as a little faith of the followers. Of course, as the difficulty increases, the penalty increases, but not as high as one might think. 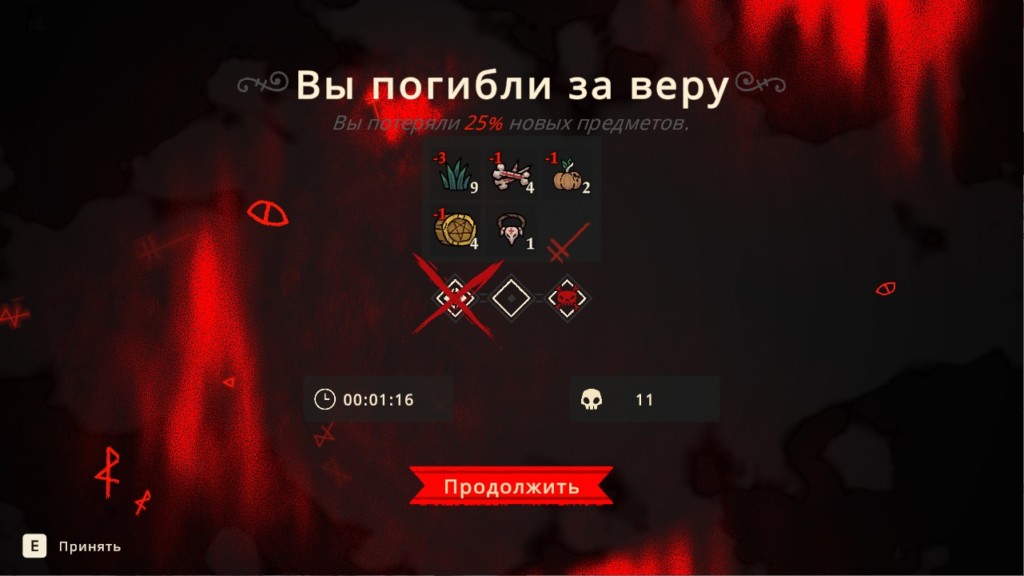 In general, do not worry about your death – this is part of the game. Perhaps, after death, the game will give you surprises …

Beat everything you see

During campaigns, you will fight with opponents in locations that are filled to capacity with destructible objects. Grass, stones, trees, tents, totems, skulls – all this and much more can be destroyed. Moreover, they are not only possible, but must be destroyed. The thing is that precious resources are poured out of all these objects, and given that you are the leader of the cult, you definitely need resources, especially bones, which are always in short supply for rituals. And from some items, coins generally fall out. 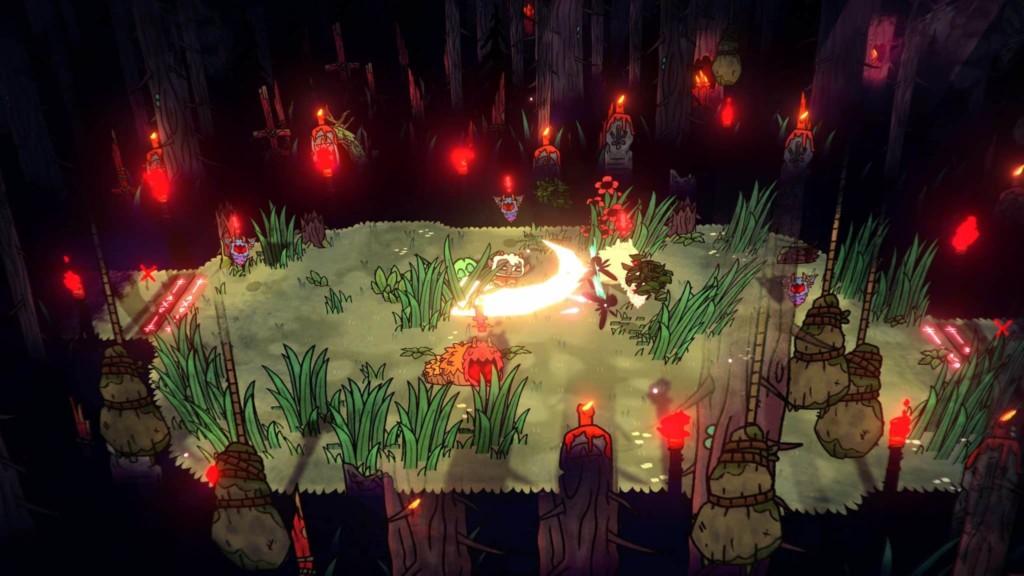 Beat everything, literally everything you see on the locations, and you will never need anything!

The more followers [in the beginning], the better

After passing the next, relatively speaking, “floor”, you will see a map with new floors, roads that lead to resources, tests, merchants and other interesting things. And sometimes on these roads you will come across new followers. Always try to choose a path with followers, at least in the beginning. Do this until you have at least a dozen followers. 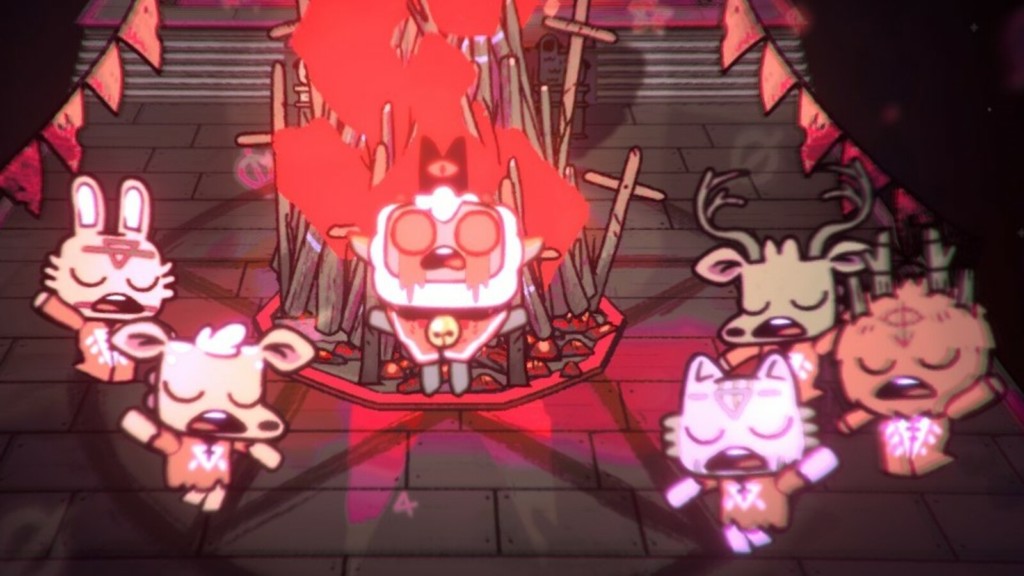 The more followers, the more labor force and the more resources that this labor force will produce. Of course, a cult with a bunch of followers is more difficult to manage, but the game does not rush you anywhere: you can safely think through your actions in real time.

Dig up the beds as early as possible

Cult followers are living beings with their own desires and needs. One of these needs is food. In the absence of food, the followers will be dissatisfied, they will begin to lose faith in you and your teachings, and if there is no food for a long time, then they will simply die. In order to resolve the issue of provisions once and for all, we suggest that you create a farm on your site as soon as possible. We dig several beds, sow them with available seeds, for example, berries, periodically water and harvest. 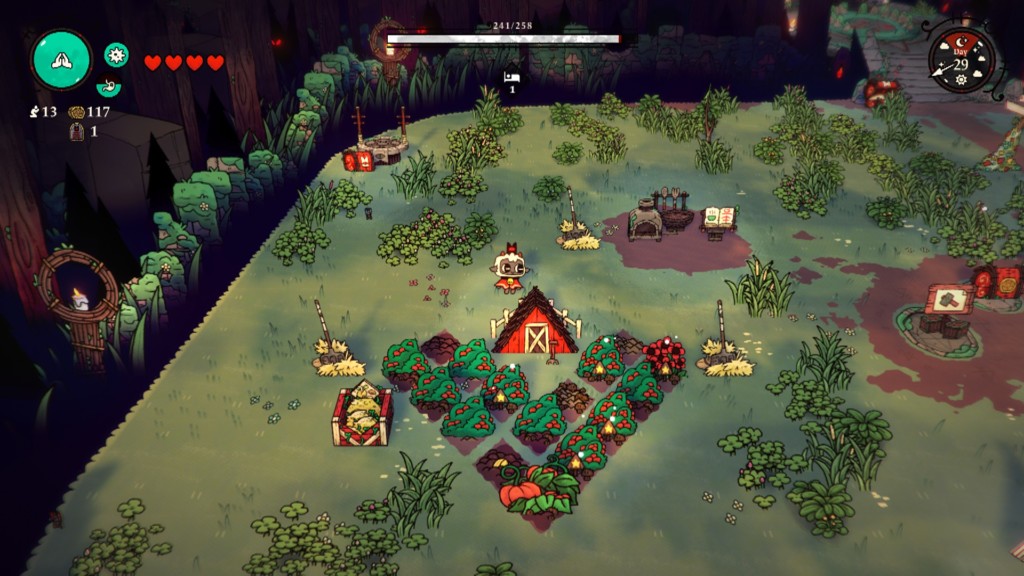 We put a barn, a scarecrow, seed and manure storage next to the beds – a semi-autonomous farm is ready. Your followers will plant the beds themselves and take care of them, and you will only have to collect the fruits of their labors. Shouldn’t a cult leader wallow in the mud? That’s right, entrust it to your devoted followers.

Once you’re done with the farm, there are a number of settings you can make: 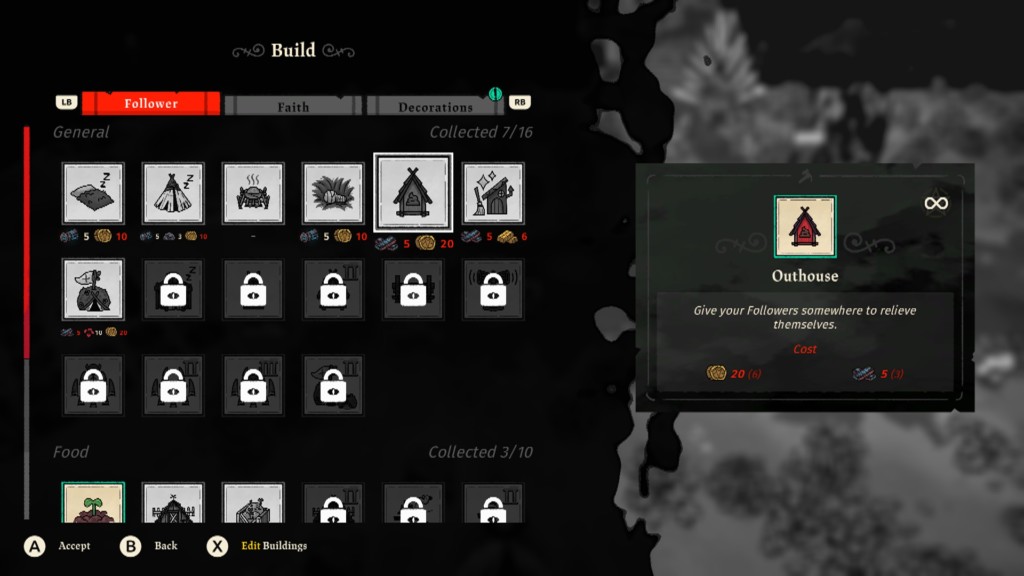 Once a day (game, of course) you will be able to perform a series of actions with your followers. Preaching in the temple allows you to collect their life force from cult members and transfer it to the scarlet crown, plus a small bonus to trust. In addition, every day you can perform various actions with each follower, which also increase his level of trust in you. 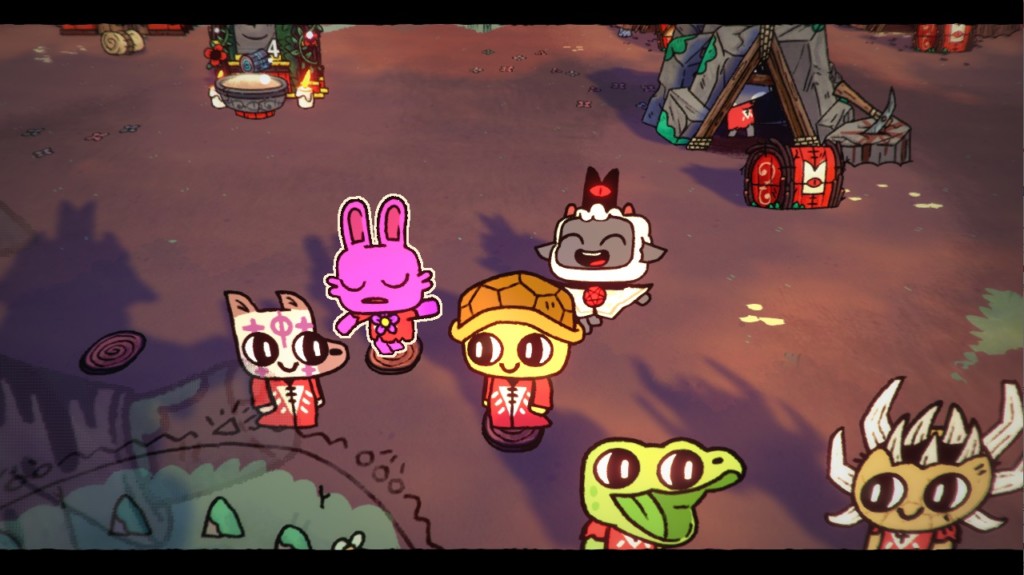 For example, you can perform an inspiring dance with a follower or even bribe him. The list of available actions will depend on what improvements for your cult you were able to open in the temple. In order for the cult to develop faster, try to at least periodically engage in these “dailies”.

Don’t put off graves for later

Whether you like it or not, your followers will die. And they will start doing it much sooner than you think. Unfortunately, even cultists are not immune to old age. But you are, of course, an exception. The body of the deceased increases the level of unsanitary conditions in the territory of the cult. The lower the sanitary level, the more often living cultists will get sick. In general, the bodies of the dead must be disposed of, and as soon as possible. And this is where graves come into play. 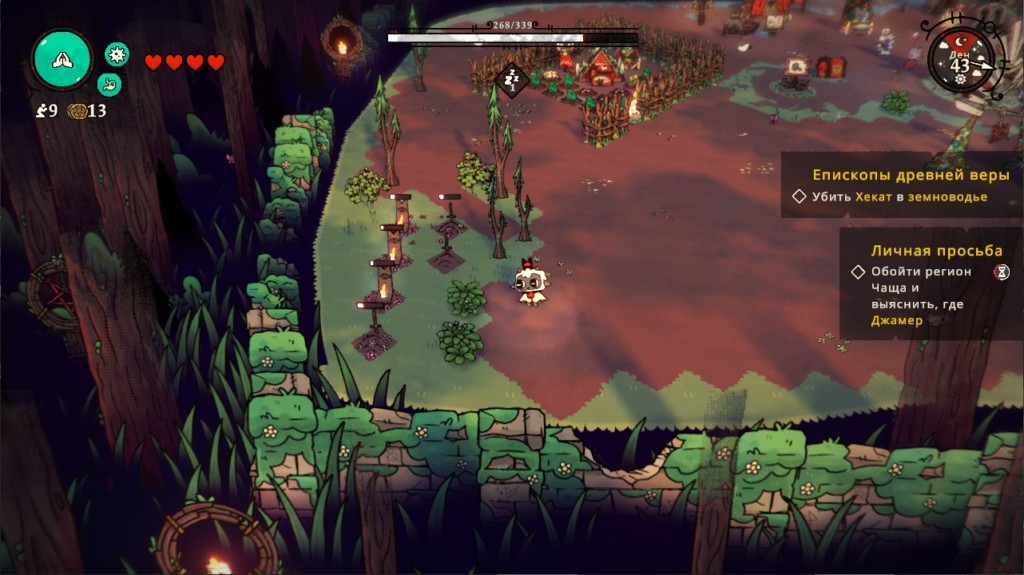 After the burial, the bodies will continue to bring you loyalty points, but only after the memorial service for the deceased. As the saying goes, even the dead have no rest. And if you go slowly through Cult Of The Lamb, then you can have a whole graveyard!

Cult Of The Lamb managed to become incredibly popular in just a couple of days. Just look how many people are playing it on Twitch right now . And this is not surprising: the developers from the studio Massive Monster managed to create a first-class “roguelike” with elements of urban development, where the player needs to play the role of a cult leader. Have you played something similar?

How to make a dropper in Minecraft

How to play together on Among Us