Flying has always been a dream for the human being and thanks to the invention of the Wright brothers today we can enjoy the experience of flying by plane and move to very distant places in a few hours. Airplanes have a strange appeal to us all, which is why it is so common that we like airplane games , especially simulators.

There is a wide variety of airplane simulators in the Play Store . You can fly from a fighter plane to a commercial plane, through rescue planes and even drones. Also, the great advantage of this type of games is that most of them are free .

The best airplane games in the play store

Airplane Flight Simulator 2015 is one of the top rated simulators by users. In this game we can fly up to 12 detailed planes which are replicas of real planes , such as the Cessna 182 or the Piper PA46 Malibu Meridian.

We can fly very different types of aircraft, from single-engine to jumbo aircraft, flying over a total of four well-detailed cities and visiting nine airports, including five commercial airports, two ports and two small airports.

One of its great advantages is that the application is free and does not contain online purchases. The planes are unlocking as the game progresses.

This game works on phones and tablets running Android 4.0 and higher and requires 53MB of free space on the device.

AirFighters is one of the most advanced combat fighter simulators . It allows navigation with realistic maps and incorporates 500 real airports with real-time weather conditions.

In this game, realism has been given priority in everything related to the characteristics of the airplanes. Not only in terms of aesthetics, but also in terms of performance and autonomy. The landing strips were also designed in detail in real models.

The player can learn how to manage planes in training missions and once ready can be tested in the world campaign, entering combat against enemy fighters.

The game has a variety of eleven aircraft, including the F-14 Super Tomcat and the F-16 Falcon.

This simulator works on devices with Android 4.0 and above, requires 90MB of free space.

Plans: Fire & Rescue is one of the airplane games for the little ones in the house, as it is inspired by the Disney Aircraft movie .

It is an interactive story where the goal is to fight a forest fire with different interactive games and puzzles.

Although it is a free game, it does contain in-app purchases, so be especially careful if children will play it.

This game requires Android 3.0 or later and 308MB of free space on the device. 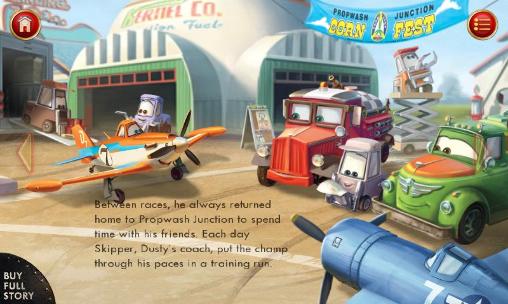 If you like mobile games don’t miss our advice on horse games and the best SpongeBob games for Android.

How to play Rocket League between PC and PS4

Herobrine: How to summon Herobrine in Minecraft

How to put the Italian language on Roblox